One of the major gripes that I have had with Dungeons & Dragons, in this edition and prior, is scaling daily activities to appropriately challenge a party. The game is supposed to be balanced for 6-8 medium to hard encounters a day (Dungeon Master’s Guide pg. 84), but realistically, that doesn’t happen at my table. On the rare occasion that I place 4 or 5 combat encounters in a single day, the players and I get bored because these combats take up pretty much the entire session, leaving little time for exploration or roleplaying.

So if your party doesn’t love to grind all session, you likely end up with 1 or 2 encounters during an adventuring day. Since you don’t have the other encounters to wear the players down, you probably feel obliged to challenge them with “deadly” level encounters, which may not fit thematically for your game (my level 8 characters can’t just wipe the floor with some random wolves?).

In this post, I want to present a more liberal use of the exhaustion mechanic for effectively challenging players without rolling initiative 10 times, making your players unnecessarily roll death saves, or spending ¾ of your session fighting in combat.

Exhaustion is generally hated by players and dungeon masters. It’s incredibly penalizing and very difficult to get rid of. Yet, it is one of the only mechanics that imparts a skill penalty from a physical condition, which I’m actually a fan of. Munchkins and power-gamers hate it because it is a huge, tangible penalty to mechanics that is difficult to remove because of its reliance on long rests. However, if we managed to figure out a way to make its effects both short-lived and thematic, you may find that these “penalties” are far more rewarding to the story than the numbers would have you think.

A New Way to Get Rid of Exhaustion

The main reason why people don’t use exhaustion is because it’s hard to remove. So why not make it easier to get rid of? That way we can use it more often. Below I propose a rule that makes exhaustion more usable in a game.

Why is this a great mechanic?

So, now that you have considered this first rule, when should you hand out levels of exhaustion? Now that we can more easily get rid of exhaustion, let’s hand it out more often. To this end, I propose a second rule:

Why is this a great mechanic?

Other Reasons to Hand Out Exhaustion

With the two rules above, we have a viable means to handle the exhaustion mechanic. However, we can still expand our use of exhaustion beyond combat. There are several options where you can dish out more exhaustion than the normal combat penalty.

The easy first option is exploration encounters. Long periods of arduous travel, a sandstorm, a landslide, a mountain climb, or an avalanche. Don’t let the Player’s Handbook bully you into keeping track of when to make a roll to see if your characters are tired. If it fits the theme or if the characters are pressing on after a grueling battle with a couple owlbears, it’s completely reasonable to think they might have an issue with exhaustion.

A less obvious scenario is for social encounters. Being at a gala all day chatting up nobles, remaining in disguise as another person for a significant period of time, or getting made a fool of by your arch rival in a public setting: all of these are perfect times for rarely used Charisma saves. Remember, exhaustion doesn’t have to necessarily represent physical strife, it could represent a mental block which is hindering your skills. In a future blog post, I would love to talk about the lesser used ability score saves, as they are huge and can be game-changing.

Last but not least, use exhaustion for combats that you don’t feel like running: if a bunch of random encounter bandits try to take down your level 10 party on the road… c’mon that’s not a legit combat, don’t waste your party’s time. Roleplay it out real quick, make it a quick skill challenge and if anyone fails terribly? BOOM, they got stabbed in the belly… exhaustion. You thematically got your combat, you didn’t waste everyone’s time, and you potentially drained some resources from the party.

Let me be clear. I don’t hand out exhaustion like candy, especially not in a heavy combat day. This is for roleplaying and exploration days that I want to make interesting.

When you give out these subjective exhaustion levels, barter with your players about it. If the wizard is about to get a level of exhaustion for climbing a mountain all day, allow a player to expend a spell slot or 2 if they can thematically make that fit. Maybe the druid notices that the wizard is huffing and puffing and casts goodberry for him to eat or casts enhance ability to allow him to leap up the cliffs. Again, this is a great roleplaying and story opportunity for players to help each other and it bleeds them of resources, which is the other goal of an adventuring day!

Likewise, when I’m asking for these saves in exploration or social settings, I don’t have everyone roll because someone will always fail and then you’ll be in danger of handing out too much exhaustion. Therefore, you should single out one player (or two) who would be the worst off in the scenario and make them roll (e.g. the old wizard climbing a mountain or the barbarian trying to maintain his composure among the nobles). This strategy allows the other players to potentially help them.

Lastly, realize that this will make the first level of exhaustion prevalent in your game. Your players have to buy into this and realize that this isn’t about dungeon master vs the players. The first level of exhaustion causes disadvantage on all skill checks and many may argue that this is ridiculous and shouldn’t be used because it hinders roleplaying. My counter to that is to remember that skill checks should only be used when they make sense. If the player makes a reasonable argument or proposition to the king but is exhausted, a crappy skill check doesn’t make that argument or proposition unreasonable. That player never needed to make that check to begin with, because he succeeded with his roleplaying.

Similarly, it is important to remind your players to help their exhausted teammates. There are a million things your players can do with spells, abilities, or just roleplay to cancel out the disadvantage of a skill check.  If the rogue can’t unlock the door because he’s exhausted and his hands are shaky, maybe the player with an herbalism kit can whip up some tea that will help calm him down long enough to try the lock or maybe the monk can lead him into a state of meditation with a Religion or Medicine check. Don’t forget about bards giving out inspiration! The possibilities are endless.

With these new rules and a collaborative storytelling atmosphere, the Exhaustion mechanic isn’t penalizing. It’s a tool for roleplaying and resource management. Good luck. 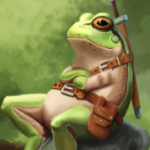 Emergency medicine doc in Virginia. Lover of most things nerdy. Enemy of most sport things.

The Chronicles of Zeska, or simply Zeska for short, was a short lived campaign based on strategy and warfare, where the players commanded an army.
D&D under appreciates size. Applying the physics lessons from a Kurzgesagt video, we explore what other mechanics can aid in making creature size more realistic
Aaron Hübrich, the Lead Designer of Gods and Goddesses, responded to our review of Gods and Goddess. This is my detailed response to his response.